I recently finished signing up for (hopefully) my final semester of (undergraduate) classes at University. I don’t think the significance of this coming semester being my final one has quite sunk in yet. Maybe it’s simply due to me already being in the middle of the semester now, but I haven’t yet begun panicking or experiencing ‘senioritis’. I’m sure those will both come in due time, but in the meantime, I had to figure out which classes to take to round up my college education.

I actually only need 3 credits to graduate — specifically, my senior design project. (Right now the project I’m signed up for is some sort of DDOS resistant router program. I’ll have to learn what’s entailed later.) However, in order to keep my financial aid, I need to take at least 12 credits a semester. So what classes should I take besides the senior design project to round out the other 9 credits?

I’m currently an Economics minor with one class left, so right away I decided to take an interesting course in that. So far I have Intermediate Microeconomics and Macroeconomics, and I’m also currently enrolled in Game Theory. Although I’ve been recommended to take Money & Banking because it’s allegedly easy, I’m not too keen on taking such a course. Instead I opted for Econometrics. It’s said that one can’t really appreciate the economic techniques without it. Or maybe it’s just recommended. Either way, I’m curious about what’s entailed, so I signed up for that. This brings me up to 6 credits left to fill.

Although I’m in my fourth year of Electrical & Computer Engineering, and despite my concentration in Electrical, I’ve discovered I’m actually not too keen on many parts of Electrical Engineering. Neither Power Engineering, the study of efficient electricity transmission, nor Electronics interest me. I tried doing Communications, the study of transmitting information through various mathematical signals, and I do find it interesting, but I don’t think I find it interesting enough to want to pursue further than I already have. The only thing left for me in Electrical Engineering is Digital Signal Processing, which is actually a fairly interesting field: the analysis and processing of signals which can be understood by computers. Ironically, there aren’t any courses being taught in it during the spring. Therefore, I am forced to turn to the “dark side” — programming.

As I’ve already accepted a programming job for after graduation, I figure getting some good programming experience now can only help me hit the ground running. The first class I signed up for is Systems Programming, which involves programming things like threads, sockets, and file operations in C. I hear it’s not an outrageously difficult course, being aimed at sophomores in Computer Science, despite requiring a fair amount of work. I’ve been told that Brian Russell teaches it. He has an interesting reputation, but I hear he’s a good professor. Overall, I’m looking forward to it.

However, my second course has me a bit worried. It’s Network-centric Programming, being taught by Marco Gruteser, who’s reputed to be one of the most challenging professors in the Electrical & Computer Engineering department. (And that’s saying something, considering how amazingly difficult our Communications professors are.) The class, as the name would imply, is about writing programs which operate over networks, and then making them safeguard themselves against attacks. I’ve heard there are seven homework assignments as well as a final project. Taking this at the same time as Systems Programming is probably a bit daring, as the projects will most likely overlap in quite a stressful way.

Actually, because Systems Programming is 4 credits (Computer Science classes are apparently all 4 credits each), I’m signed up for 13 credits. Oh well, not much to be done about that. This will possibly be my most programming-intensive semester yet — hopefully good practice for the working world. Although I’m not amazingly enthusiastic about taking a full suite of intensive classes my final semester, I do think that it’s more fulfilling than taking arbitrary filler classes. Granted, I could be taking so-called “interesting filler classes” like Psych 101 or Public Speaking, but I kind of want my tuition dollars to go towards something meaningful. 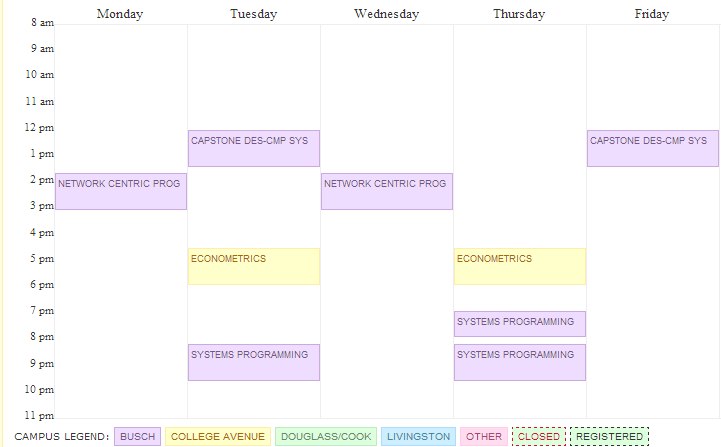 Attached is a picture of my tentative schedule of classes for next semester. It’s a little bit odd because engineering classes are always during the early morning or afternoon and CS classes tend to be late in the evening. Fortunately, the capstone class slot is actually just a reserved time slot, so there’s no class and nothing going on then. Hopefully that means I have Fridays off!

Well it’s now February and I’ve changed up my class schedule a bit. For anyone who’s made it this far, you should know my final schedule has changed slightly. Read about it here.