How to Pump Up the Bass: Understanding Audio Frequencies

The other day I was having a discussion with my roommate Mike about the physical intuition of digital photographs, and how performing even the most fundamental of operations (e.g. resizing) requires an appreciation of the underlying mathematics. We are both currently in image processing classes, but very different kinds. His course is in Computer Science, so his studies tend to be of the use Java; things happen; make apps variety, with only some slight motivation and understanding of what’s happening under the hood. My course, on the other hand, is in Electrical Engineering, which means it is of the here’s some math, and here’s how you do this math in Matlab variety. There’s advantages to both educational approaches, but debating the merits of theory- centric versus application-centric education styles is beyond the scope of this post. Instead I want to quickly motivate some of the fundamental theorems of Signal Processing and show how they are applied. In this post, I will cover the first, and most intuitive, of signals: audio.

We’re generally used to seeing and hearing things in the so-called “time” domain, where anything we observe can be called a signal, and because they often vary over time, they are therefore time-varying signals. Take, for instance, a clip of the song Safe and Sound. 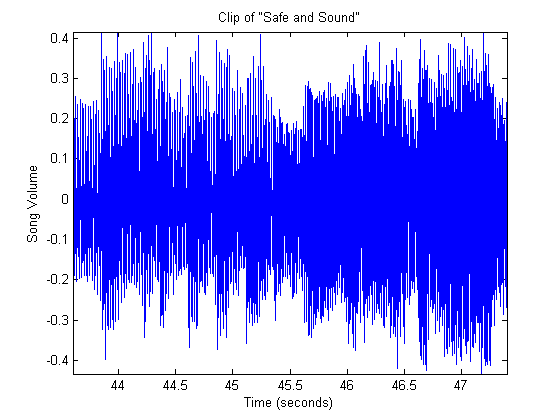 The spikes represent spikes of volume, and read from left to right we see the content of the music signal for a few seconds. We’re probably all seen this representation before. On the other hand, we could take a look at the frequency-varying signal representation of the same clip. At the left end, where the fundamental frequencies of the singing and instruments are present, the signal is strongest, while the higher end with some details are not as loud. 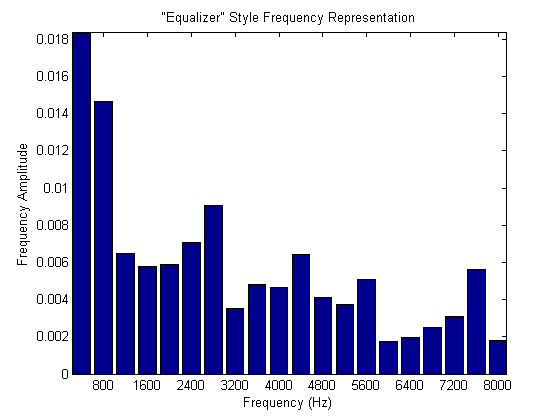 (Below is an example of the more stylized depiction of frequency representations of music.)

However, these are both representations of the same song! but simply seen from a different perspective. However, there is an important insight to be had here. Both the “time” and the “frequency” depictions of a song, or any signal for that matter, are actually mutually equivalent; there is a duality between time and frequency.

Filtering is Always in the “Frequency Domain”

When speaking about enhancing music, people often say things like “pump up the bass” or “boost the mids”. What they really mean, of course, is that they want to selectively amplify a certain region of the frequencies of a given song, relative to the other component frequencies. The phenomenon wherein certain characteristics of a signal are selectively manipulated in some way is called filtering. For instance, the equalizer in your car filters the songs coming over airwaves. It can pump up the bass by multiplying the intensity of those “bass” frequencies by some amount. Similarly, it can mellow the highs by dividing the intensity of the “high” frequencies by some other amount. In general, a filter is therefore the construct which, when given a signal, multiplies, divides, or otherwise shifts frequencies up or down to have some intended effect.

Edit: This post has a second part available here.