Peter Naur, famous in the programming world for his contributions to ALGOL and the Backus-Naur Form (BNF) notation for expressing grammars, passed away last week. (For those who are not in the programming world, ALGOL’s grammatical syntax inspired most of today’s most popular programming languages, like C, C++, Java, and Python). As a very young millennial programmer, I’d of course heard Naur’s name from the BNF notation, but didn’t really get to appreciate just how prescient his work was at the time.

One of the comments on “Hacker News” in response to the news of his passing mentions that his “Programming as Theory Building” is one of the more seminal (if less well-known) early pieces of programming literature about the practice of software development/engineering as an industrial pursuit. I checked it out (it’s a short read), and it really resonated with me. I’ll highlight some of the high level points below.

For the sake of clarity, I’m presenting this as a cooking allegory. (Also I’m writing this on Saturday night and I’m hungry.) Because words like “computer programming” and “algorithms” can be scary to the uninitiated, I’ll use “recipe” everywhere here instead.

Recipes Are About Food, Not Steps

Although recipes are written in steps, the steps are only a process to get from raw ingredients to a delicious dish. The steps describe the series of transformations which bring about the desired result.

So too, computer programs are a series of steps a computer follows to perform some desired calculations. For example, sending a text file to a printer requires calculating things like letter spacing and ink placement. But when I click “Print” on a document, I am not particularly interested in the intermediate calculations – I am only interested in getting my document printed.

Recipes Reflect an Understanding of Food and Flavors

Any amateur cook (like me) knows that executing a recipe is far simpler than crafting one. Originating a recipe requires an intimate and nuanced understanding of flavors, flavor interactions, cooking methodologies, chemistry, etc., as well as being able to execute all the steps necessary to bring the ingredients together into a dish. Furthermore, it requires strong and descriptive writing to be able to accurately describe the steps required without any mistakes. This is especially important for difficult and lengthy recipes!

So too, writing a computer program requires a nuanced understanding of the problem being solved by the computer program, pros and cons of various approaches, etc. It also requires the knowledge and expertise to describe those steps in a manner amenable to execution by a computer. As problems become progressively larger, in turn they require progressively more instructions to be described to the computer program. The quality of the description necessarily must be of increasing quality with more difficult and lengthier solutions, or else mistakes may arise during the literal execution of the program steps (“bugs”).

Although probably anyone can add or remove ingredients from a recipe for a sandwich, not just anyone should change recipes for more challenging dishes. First one must understand intimately whether the ingredients are adding up to a special whole, whether there are important chemical interactions, etc.

For example, my mother taught me a recipe for Macaroni and Cheese which involves creating a cheese sauce using a sauce base known as a roux. For those who don’t know, a roux is a sauce base formed from the chemical reaction of flour and fat cooked together at a very specific heat and ratio of fat to flour. Once prepared successfully, it is generally straightforward to derive a number of related sauces from the roux. In the case of my family Mac & Cheese recipe, the roux is mixed with milk and cheddar cheese to produce an orange cheese sauce (which I highly recommend). 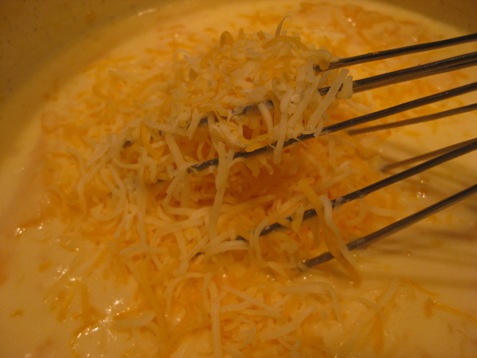 The hardest part of my family recipe is properly executing the roux. Anyone with a knowledge of French cooking knows about roux, and that the fat and flour are necessary to create it. However, someone without this knowledge may make a mistake like thinking, “I want a low fat version! Let me use less fat.” This will not end well. Having too little fat will necessarily cause too much flour taste to linger in the sauce, ruining the dish. Producing a low fat version of a recipe involving a roux requires making modifications elsewhere in the recipe. This cannot and will not be specified in most recipes; understanding roux is beyond the scope of a recipe.

So too with modifying computer programs, a programmer must first understand the why of a program as well as the how. Attempting to make modifications without knowing both will end disastrously. Even if it takes a long time, it is of vital importance to first understand a program before modifying one.

Although until now, the same concepts were able to describe both cooking and computer programming, it should be apparent that writing nontrivial computer programs is more difficult than writing nontrivial food recipes. A difficult food recipe may require several pages to describe, but a difficult computer problem may require millions of lines of code to solve. The challenges of maintaining coherence and maintainability across such a lengthy “recipe” should be self-evident.