My First Holiday in Italy

This blog post is long overdue; I’ve been a bit preoccupied since getting back to the States, but I wanted to briefly share some of my thoughts from my recent honeymoon in Italy.

My wife and I had our long-overdue honeymoon early last month, in gorgeous Italy: Venice, Rome, Florence, and Milan. This was the realization of a dream for us; few countries in the world have the culture, history, art, dining, and exquisite beauty which Italy has. We wanted to really see all the sights and soak up as much as possible, so we decided to tour the major cities aggressively. (Maybe in a future visit we can have the luxury of relaxing in a quiet resort and watching the world pass us by.)

The first thing anyone notices about Italy is how gorgeous it is. In our case, we fell in love before we even arrived in the country proper! As we were passing over the Alps into Italy, we were greeted by a spectacular view of Mont Blanc towering high above the clouds. At first, I thought we were in a winter paradise because the cloud cover below was so soft and light, and the mountain peaks above us dwarfed us below. It took quite some convincing by my wife that we were, in fact, still in the sky.

The sights only continued to get better as we descended into Milan Malpensa Airport. Although Milan itself isn’t quite gorgeous, the Italians definitely know how to decorate a train terminal! I commute into and out of Grand Central every day, and I thought we could take a lesson or two in decor from the terminals in Italy.

I think I first fell in love with Italy properly when we arrived in Venice. The train passes over about a mile of lagoon, with only still waters on each side of the train, only to suddenly arrive in a train terminal on a city without highways or roads, or anywhere else for trains to go! 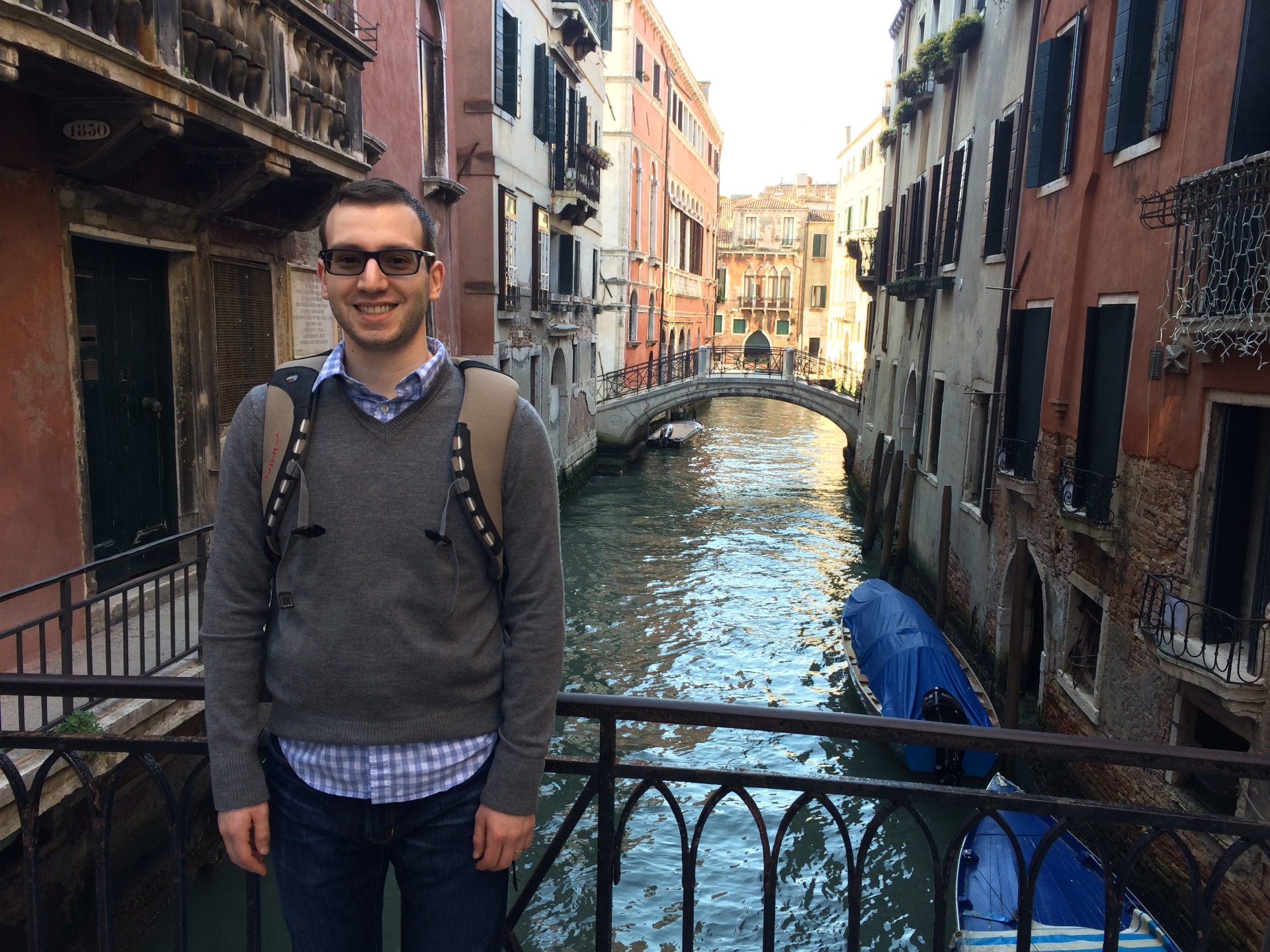 I can’t do Venice the justice of trying to describe its immense beauty, despite its apparent age. The canals, the gondolas, the lagoons, all overwhelm the senses. I don’t think I’ve seen anything quite like the sun setting over the canals. 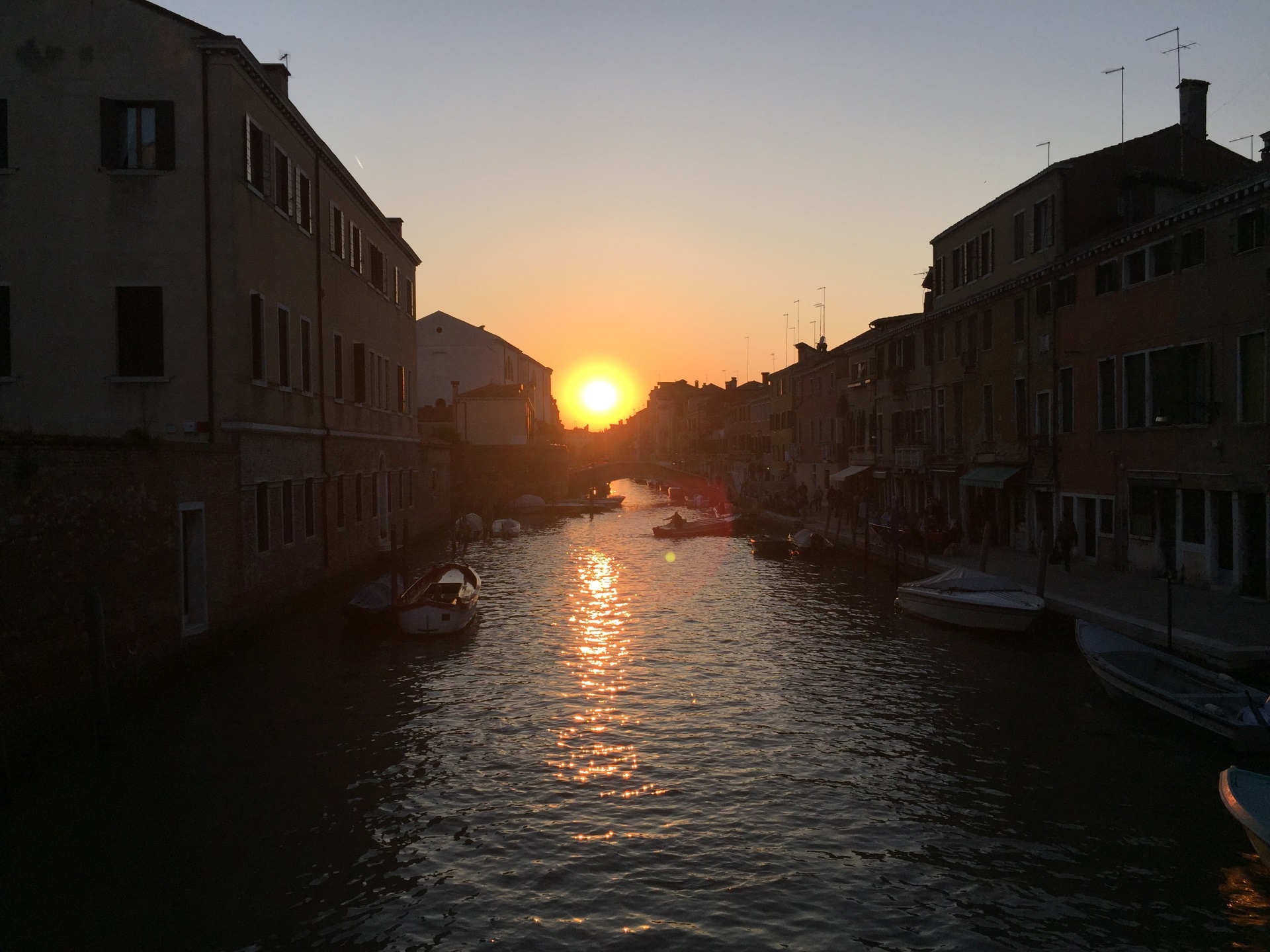 After three days in Venice, we had our fill, and moved on to Rome. Rome reminds me so much of Jerusalem (which I’m sure has more than a little bit to do with Roman domination of half the civilized world). I really felt oddly at home with all of the column and occasional ancient monuments littered about the city. Although Rome doesn’t have quite the intrinsic beauty of Venice or Florence, it boasts the mightiest structures in the country. The Colosseum, Roman Pantheon, Vatican, Trevi Fountain, and half a dozen other monuments make the might of Ancient Rome clear.

We ended up spending only three days in Rome, due to time constraints. We managed to visit most of the major monuments and a few of the museums; although we didn’t feel like we missed anything, per se, we were touring so aggressively we passed out at the end of each day. We also got the sense that we probably missed many of the smaller sites, despite getting to most of the major ones. If given the choice, I’m sure we’d love to go back to Rome to see the little things we missed, but we had to hustle on to Florence. 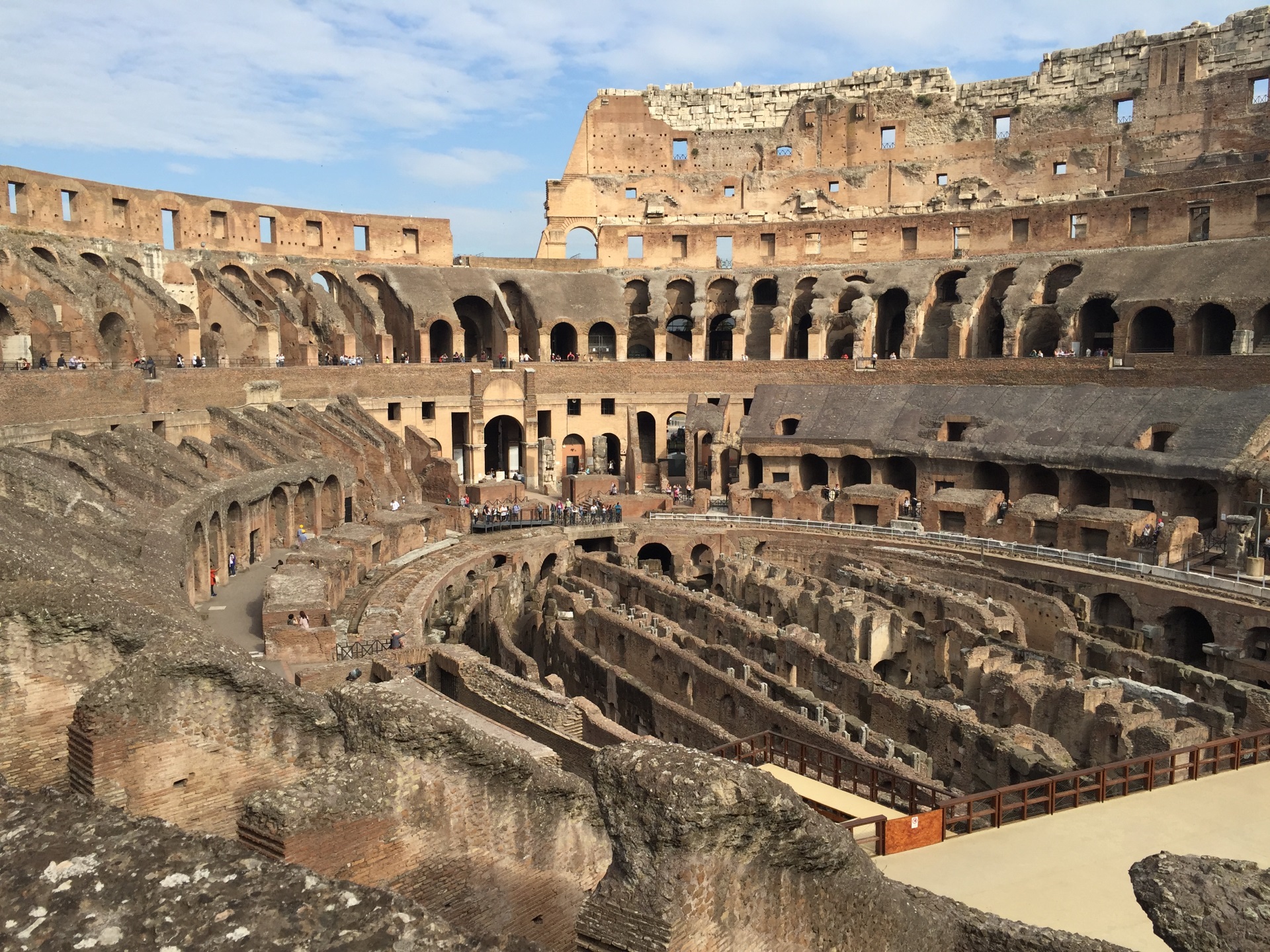 Truth be told, my wife loved Florence more than I did. The city definitely has a distinct architectural style. Overall, I don’t think that the city of Florence itself is as beautiful as Venice or even Rome in an absolute sense; rather, it seems to me that Florence has an unparalleled grace arising from its neat nestling amongst the hills of Tuscany. Even more so than Venice, in Florence it really feels like time has not passed, and the city is as it was centuries ago, when it was still an independent city-state.

Florence is actually a fairly small city – the city proper seems to be a little over two square miles, which is actually quite walkable. Within it, the primary sights seemed to be the town’s gargantuan cathedral; the world-famous Uffizi art gallery; and the Ponte Vecchio, which appears to be Italy’s equivalent of the Diamond District. (Although the Ponte Vecchio is a hell of a lot more attractive than midtown Manhattan!) 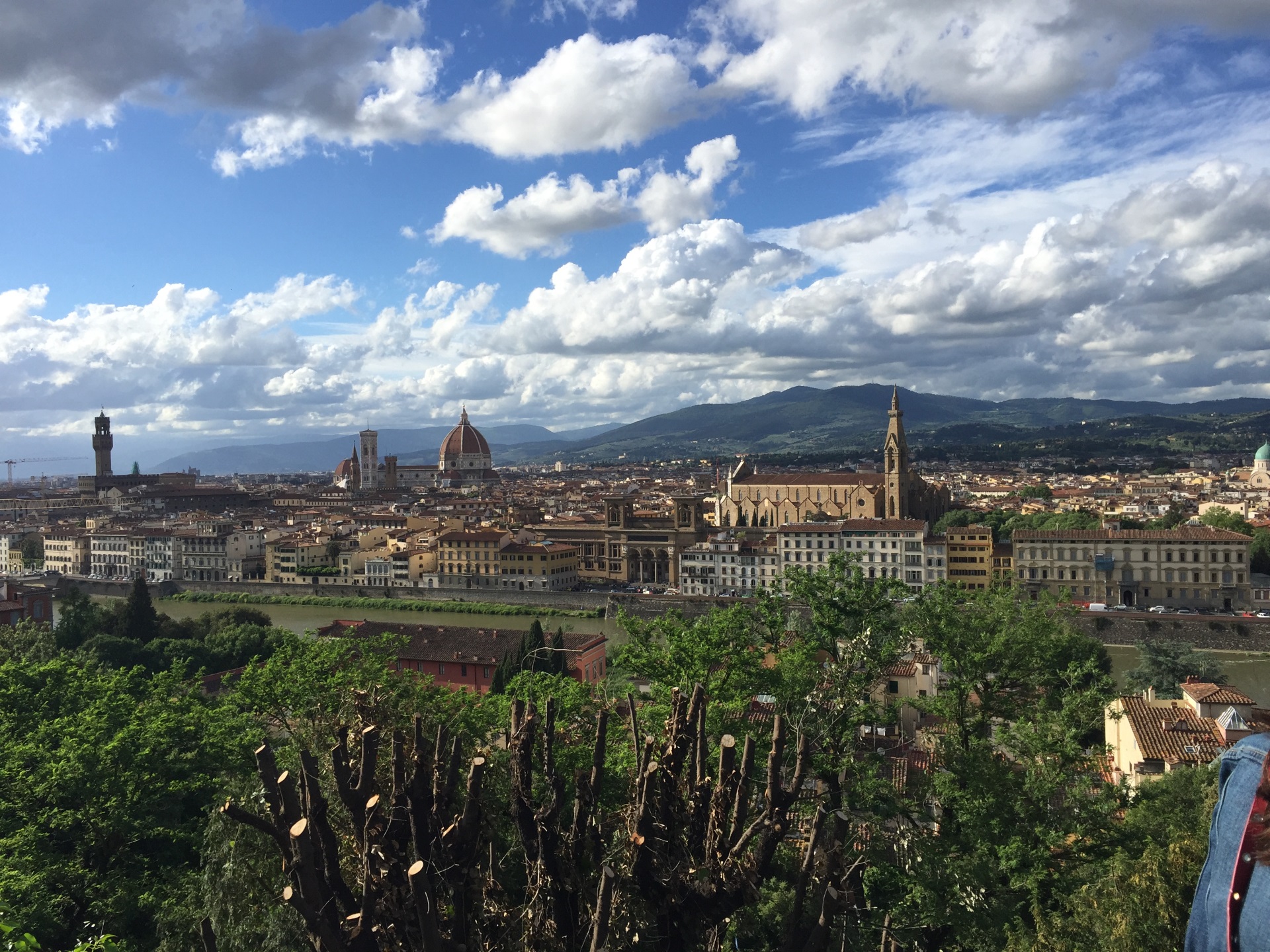 There’s this old joke which goes something like, “If aliens came to visit Earth from outer space, even they would like Italian food.” I make no excuses about my decision to go to Italy being significantly motivated by culinary interest. Suffice it to say we were not disappointed. Pretty much everywhere we went, the food tasted fabulously fresh, homemade (or better!), and truly authentic. I think we each gained several pounds over the short time we were there, despite how much walking we were doing each day!

Also, I never had really experienced artichokes before arriving in Italy. I am now a big fan. I kind of miss the deep fried artichoke now. (It’s the little things which stick with you, I guess.)

I need to talk about the coffee separately from the dining because of how pleasantly surprised I was, against my own expectations. I’m not much of a coffee drinker, despite working on Wall Street, so I didn’t really arrive with much of an expectation about what the coffee culture would be like. I was vaguely aware that Starbucks is aping the styling and palette of Italian coffee, but that’s about it. Boy was I impressed.

The Italians don’t drink coffee at all the way we Americans do. Whereas we drink slow-drip coffee several ounces as a time, Italians almost exclusively drink espresso, and only a couple of ounces at a time, in tiny espresso shot cups. If you order a cappuccino, a highly trained barista with years of experience expertly steams milk and combines it with the espresso in ways I dare not attempt to describe, but which can only be characterized as art. And the quality and care of the ingredients! It’s hard to imagine that the Italians are using different coffee than we are; I can only presume that their dedication to coffee results in such superior coffee technique. (If you happen to have a hankering for coffee which is weaker/diluted from an espresso, that’s precisely what you’ll get – diluted espresso, called an “americano”.)

Now that I’m back in the US, but having sampled real Italian coffee, I’m seriously struggling with the mediocre coffee my local Starbucks is serving up. As mentioned before, I strongly suspect that the average Starbucks barista is simply not experienced enough at their craft to create coffee on par with what I now know is possible to make. I more and more find myself wandering a block or two further in the city looking for better coffee. (Ironically, much like real Italian espresso, the better stuff is also cheaper.)

Although I wouldn’t dare call myself a history buff, I’ve always been interested in the history of the major world empires, and touring Italy is a great way to explore millenia of world history in a single place. Venice and Florence each had several centuries of history (although again, in my opinion, Venice’s history was more varied and interesting than that of Florence). Rome, though, is a historian’s dream. I really learned a lot that I didn’t know, and would have learned even more if we had a couple more days to soak in more of the history.

I’m not the biggest art fan in the world, but who can turn down the opportunity to see the greatest artistic works of the TMNT? All of the art we saw was exceptional (I’m a sucker for the romantic style), but I was most impressed by the statues. I was not expecting to be as blown away by Michelangelo’s David as I was, considering how impressive Bernini’s The Rape of Proserpina was; yet the David has a vivacity about him which defies comprehension. See for yourself – I’ve thrown together photos of the two, below, although it might be hard to see the details. In Bernini’s sculpture, the contours of the flesh are visible in the marble, making it seem like the characters are of flesh and blood. Yet the David has an unparalleled humanity which defies explanation, and supersedes all prior and successive works. Definitely make the effort to see both sculptures for yourself. 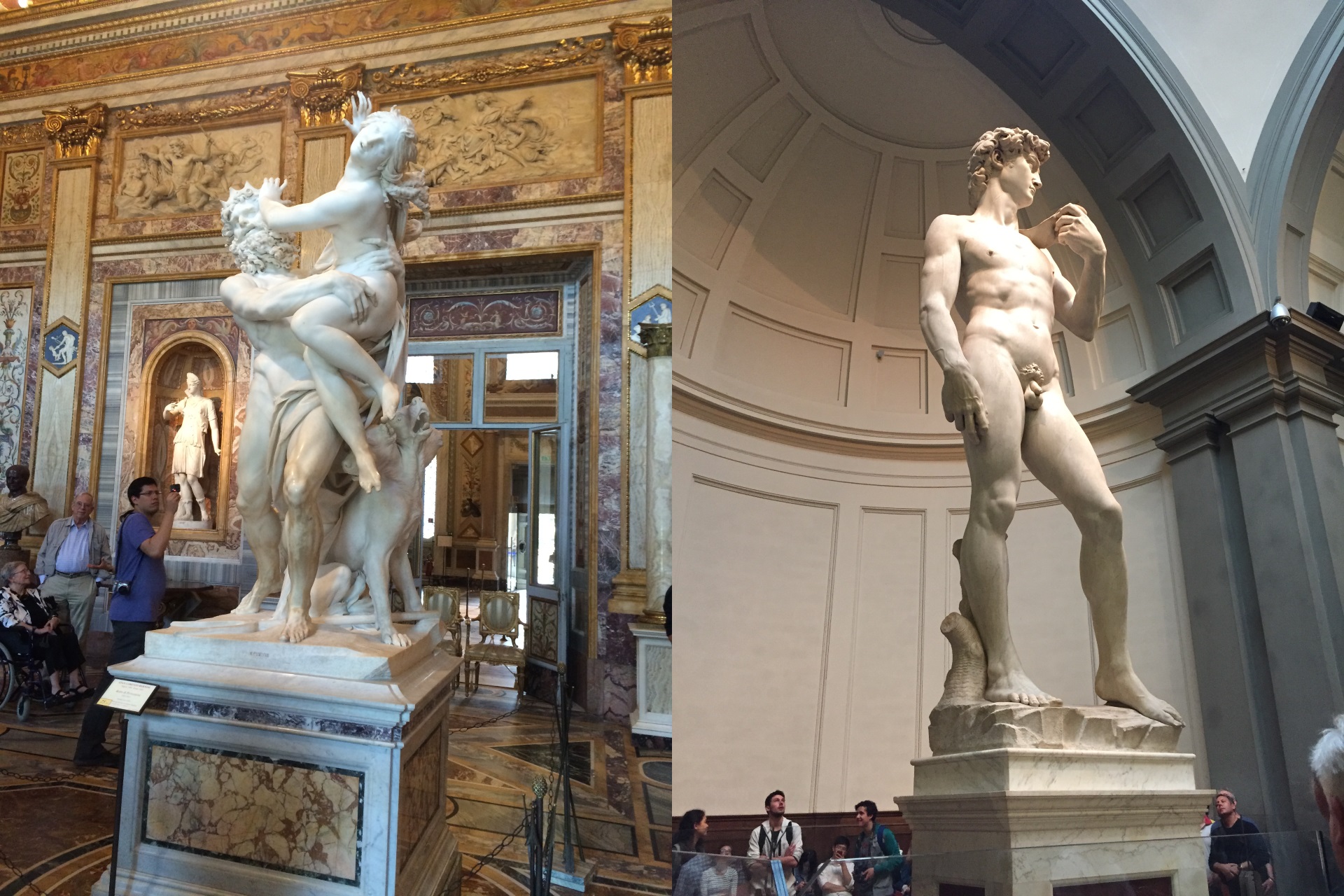